I spent a lot of time on my legs this weekend.

It started off with First Friday in Fremont, segued to the 2008 Winter Beer Festival, intermissioned for tacos, and concluded with a vertible rapper's delight with a performance battle at Nectar. It was agreed upon, by all present, that Billy the Fridge is the Greatest Rapper in Seattle. The More You Know.

Saturday, I raced in the oddly named Hardcore Food Drive Bike Race. I took sixth in time and (I believe) fifth in weight — 31 pounds! Bryan, Greg and I'm sure others took pictures! I guess I did too… 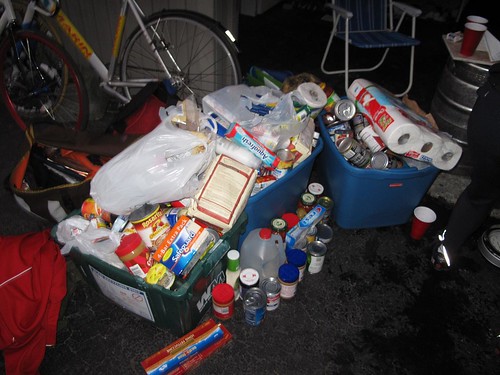 Later that night, I crashed while riding paceline with Rogelio — who by the way won the bike race at 110 pounds with his jury-rigged shopping cart bike. We were riding down from Commodore Park to karaoke at the Boxcar. Fortunately, my injuries sure as hell didn't stop me from rocking the mic.

And, you know, they could have been worse.

Then it was over to Conor Byrne for another fundraiser. This one purportedly benefiting The Bikery and featuring a Tom Waits tribute band. Choice quote of the evening? “Do you have a biker butt?” Jeeeeez. “I'd be checking out your ass even more, except I'm with someone.” Ok, that was funny.